I did not grow up in the country. My family moved around a lot as I grew up. 13 different places before I graduated high school. But rarely did I live in the “country.”
I spent more times in cities than in small towns. So, Stamford, TX shocked my system! There is a road that runs from Stamford to Abilene. I travelled that road a lot when I was in school at ACU. It is only about a 30-minute-drive, FM 600. One thing I learned is that cows always have the right away on FM 600. A few months after we arrived, I was driving, and a cow was sitting in the middle of that road. Either he or I was going to have to change our course. It didn’t take long to realize, he wasn’t going anywhere! I had to stop, redirect my car, and move on. After I left, he was still sitting in the middle of the road. For all I know, that cow is still sitting there!

I also had to get used to seeing those massive farming machines. I used to wonder how it would be physically possible to till so much land! But then I saw those massive machines! When the arms spread out, those machines can till an enormous amount of land. Technology has made the farmer’s job much easier! But, they haven’t always had these massive machines. I doubt anyone in this room ever had the pleasure of sowing an entire field with their bare hands. But there was a time when that was how it was done. Here is why I bring this up.

Jesus had a fascinating teaching technique. He expressed some of the most important doctrines of God by telling stories. But not just any stories. Stories that the people could relate to! For instance, these people who Jesus spoke to sowed entire fields with their bare hands. They knew something must of us don’t know. When you sow a field with seed, some seed doesn’t grow. There was little they could do about it. It frustrated them. But they had never thought about that problem theologically! But Jesus took this simple, commonplace frustration and turned it into a story about evangelism. And those same people who came to hear Jesus speak that day. The farmers who had sowed hundreds of miles in their lifetimes. I bet they never were able to sow another field without thinking of Jesus’ words.

I wish so much that we could hear again for the first time. Many of us, however, have heard this story so many times, our minds immediately jump to Jesus’ interpretation. But remember, only the disciples heard the interpretation. The disciples left with life-changing instruction. The crowd left with a mundane, ordinary story about farming. Nothing new. They already knew everything Jesus said. And some of these people were probably wondering why a Jewish rabbi was discussing farming! But those who had ears to hear. The ones who stopped long enough to ask Jesus. Those people left Jesus’ presence with something new.

I wish we could return once again to that day. Because I would be interested in seeing which ones of us would stick around and ask the follow-up question. No doubt, some of us would. Others of us would simply walk away unchanged. One thing you must understand about these stories, or “parables.” The power to change is often not found in the parable itself. But instead in the heart of the hearer. Some people are ready to hear and be changed. Others are so unprepared that when it finally arrives, they miss it completely!

This first parable of Jesus in Luke’s gospel is unique because Jesus uses it to discuss how parables work. He used parables to communicate most of what He had to say while He was on this planet. So, at the outset, he had to explain how they worked. Here is what Jesus has to say from the beginning: A person must be ready to hear a parable. They must come into the presence of God with open minds. Sincere hearts. Ready to learn. Ready to be changed! But in reality, not everyone is like that!

Some people who come into the presence of God could be compared to a seed that falls along the path. Jesus says this person: Hears the word, but the devil comes and snatches the word from their hearts. They never believe. In Jesus’ setting, this group is represented by the large crowd. They heard the words. They were in the crowd with Jesus. But they left Jesus with nothing more than a story about farming. They didn’t ask the follow-up question. They didn’t “have ears to hear.”

What this group is really guilty of is not changing, not wanting to change! There are some folks who simply do not want to change. They are content to just hear the story and move on. Guess what happens when you refuse to change? You become stagnant.

The story is told of a man who eagerly anticipated his 44-year high school reunion. For months he saved to take his wife back to the place and the people he'd left four decades before. The closer the time came for the reunion, the more excited he became. One night before he left he even pulled out his old yearbooks. Read the silly statements and the good wishes for the future that students write to each other. He even tried to guess what some of his friends would look like. What kind of jobs and families some of these special friends had. What had they made of their lives? Following this reunion, this was his assessment: “It was one of the saddest experiences of my life. It wasn't what happened but what didn't happen. It has been forty years, forty years, and they haven't changed. They had simply gained weight, changed clothes, gotten jobs, but they hadn't really changed. For reasons I can't fully understand, it seems as though some people choose not to change.”

It is a sad thing when people refuse to grow, especially in our faith. But before your faith can grow, you have to come to Jesus ready to be changed. You cannot be content to stay just the way you are.

Other people who come into the presence of God could be compared to the seed that falls on the rocks. Jesus describes this type of person as one who receives the word with joy when they hear it. But they have not rooted. They believe. But when tests arise, they fall away. This type of person has no foundation, much like the Leaning Tower of Pisa in Italy. Surely all of us have seen pictures of this 810-year-old landmark. 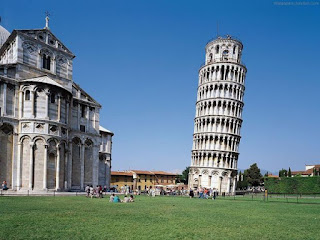 If you didn’t know before, know now. The Leaning Tower of Pisa is going to fall. Scientists travel yearly to measure the building's slow descent. They report that the 179-foot tower moves about one-twentieth of an inch a year. Presently, it is about 17 feet out of plumb. Quite significantly, the word "pisa" means "marshy land," which gives some clue as to why the tower began to lean even before it was completed. Also, its foundation is only 10 feet deep!

Sadly, some of us enter the presence of Jesus with this kind of shallow foundation. We are so excited at first. We even go beyond the stagnant group, and we change! But it doesn’t last long.

Church, there are many foundation-less Christians today. One way we see this is when we make “happiness” our idol. Christianity is not all about happiness. Some of us have been duped into thinking that as long as we are happy, our relationship with God is strong. That works great when life is free of anxiety. But what happens when difficult times arise? And they will! Your relationship with God should be deeper than your emotions. If your measurement of your spiritual depth is contingent upon your happiness. I’m afraid you are in for a rough ride.

An extremely important step in moving out of this category is building a strong foundation. Leaning into God’s Spirit. Spending time alone with God, allowing yourself to be challenged and changed. Spending time in God’s Word. Nurturing your relationships in a spiritual community.

Here is the truth: Without a foundation, you will fall down when the slightest hint of trouble arrives. Still, some people who come into the presence of God could be compared to the seed that falls among thorns. Jesus describes this type of person as one who hears the word. But as they go through life, they are choked by worries, riches, and pleasures. Consequently, they never mature.

Have you ever met someone who is just debilitated by fear or anxiety? They are always afraid of what’s just around the corner. They are constantly worried they will not have enough. They always think someone is out to get them. Or, they always feel like people around them have some “hidden” motive.

Let me be clear. Some folks do suffer from real, serious mental conditions that lead to anxiety. But there are others who, without any mental problem, are always worried and afraid and suspicious. I am not suggesting we go through life sugar-coating our problems away. But there is a difference in enduring life’s problems. And living in a constant state of catastrophe! The root problem of this kind of person—they lack faith in God. We talk a big game, but we rarely have faith that God is bigger than the troubles of this world. So, when life gets tough; we get angry. Or, afraid. Or, we might even leave. Jesus says some people like that.

But, some seed fell on good soil. Some people hear the word and produce a good crop. It’s possible to hear this story and get discouraged. Maybe you find yourself in one of the first three categories. Maybe you wouldn’t have heard Jesus’ words that day…

A few years ago, archaeologists began excavating the courtyard of a medieval monastery. They found seeds that had been dormant for more than 400 years! King Henry VIII had closed the monastery in 1539. Those seeds had been there ever since, left unattended. But something interesting happened when those archaeologist began to disturb the dirt around them, they sprouted to life.

Growth can begin again in your life. You may just need someone or something to “disturb the earth” around you. Moving you out of your comfort zone. Helping you come clean about the sin in your life. Maybe it is time for you to enter into a time of confession and repentance! Sometimes that is the only thing keeping God’s seed from taking root and growing in our lives.