Have you ever had a really rotten day? A day when nothing goes right. A day that you would never want to live again. A day that started out bad from the very beginning. There are warning signs for days like this.

You know it will be one of those days when:


You see a 60 Minutes news team waiting in your office.
Your birthday cake collapses from the weight of the candles.
You turn on the news are they’re showing emergency routes out of the city.
Your twin sister forgets your birthday.
You arrive at the office and the boss tells you to not bother taking your coat off.
Your wife says, “Good morning, Bill,” and your name is George.

Or, worse yet, you may have had a day like this: 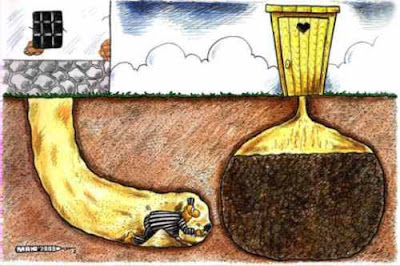 Human beings have a tendency to worry. About all sorts of things. Our jobs, our relationships, maybe even the weather. And here is truth: Most of these things we have no control over! So, why do we spend so much of our time worrying?

When they worried about clothes, it just wasn’t the same. I can see some of the teenage girls shrinking in their chairs as this illustration begins. The people who Jesus was talking to—their anxiety had nothing to do with whether or not Dillard’s was having a half-off sale.

These people had real anxieties! Some of them didn’t know if they would have a next meal. As Jesus was urging them to not worry about clothes, some of them were already nursing bloody and bruised feet. Some of them had such severe sunburns they could not function. Sandals were not worn for fashion, but for protection. Many times clothes were a matter of life and death.

And Jesus tells them, “Don’t worry about these things! Haven’t I always taken care of you? Look at the birds in the air.” The word here means much more than providing food. The most common word for “to feed” is not used here. Jesus uses a very uncommon word for a reason. God has nourished them and nursed them from infancy.

This is one of the places in Scripture where strong motherly characteristics are attributed to God. God has given them life and has protected them from the beginning. Jesus also says, “Look at the lilies of the field.” Have you ever stopped to admire the beauty of creation?

As many of you know, I love to fish. A day on the lake can be a spiritual experience. Alone, with God and God’s creation. On one day at the lake, I noticed something. As I pulled in each fish, I noticed the colors displayed on each animal. Bright orange on some. Dark Green on others. And even tints of red and pink. It dawned on me for the first time: God designed each one of the animals to perfection. Most of those colors are never visible under the water—they only become apparent in the sunlight.

So, why did God go through the trouble of creating such color in those fish? When God added the color to those fish, God knew that some of them would never even be seen by human eyes. God added those beautiful details, just in case! God provided nature with beautiful and perfect clothing.

Jesus asks, “Aren’t you more important than fish or a lily?" This is one of those texts that all of us love to hate. Because we know what God is calling us to do. But it is just so difficult to put into practice. And so many of us have tried. We pray. We try not to worry. We have genuine faith in God’s power. But what happens when life still doesn’t add up?

Winston Churchill had been prime minister for three weeks when the retreat began at Dunkirk. Many thought the British Empire was on the verge of extinction. This historic world power would finally be defeated. It was just a matter of time. The British Navy was nearly decimated! Word went out for every boat owner in the country to be ready to go and rescue “the boys.” The Germans called for a sweep through Calais (Ca-LAY’) to cut the British line of retreat. The 30th Brigade in Calais was ordered to hold the city. This was a no win situation. The British knew they would not hold this city. They needed the Germans distracted while they evacuated Dunkirk. Churchill ordered, “No surrender. No retreat.” Brigadier Nicholson knew what that meant. Fight to the death. And he was correct. Three days later they were all dead.

But when he received the orders from Churchill, he wrote him a letter in reply. His reply to Churchill has gone down in history. Three words: “But if not." Just these words, “But if not.” What did these words mean? To these three words he added a scripture reference—Daniel 3:18. At general headquarters they found a Bible and discovered the story of Shadrach, Meshach, and Abednego. Nebuchadnezzar had ordered that everyone worship a golden idol. If anyone refused, they’d be thrown into a furnace. Shadrach, Meshach, and Abednego refused. Nebuchadnezzar himself threatened them! But these three men replied to the Babylonian king. Their response is found in Daniel 3:17–18. The same verse written by Brigadier Nicholson to Churchill. They read those words out loud that day in the King James Bible they had on hand.


Our God whom we serve is able to deliver us from the burning fiery furnace, and he will deliver us out of thine hand, O King. But if not, be it known unto thee, O king, that we will not serve thy gods, nor worship the golden image which thou hast set up.

God is able! God can deliver! But if not. What do we do with that, church?

There are some “misconceptions” about God in our world. Some of those have to do with money like we talked about last week. But not far from that misconception is the idea that God somewhere promised us that obedience would grant us a free pass. If we love and obey God. If we come to church and teach our children about God. If we sacrifice, then God will give us a free pass from anxiety or disease or “family issues.”

Church, God never promised us a free pass! God promised us that when those times arise in our lives that are difficult, we would not be alone. God stands with you in the midst of your suffering. And God’s people stand with you in suffering. Those of you who have needed and received that companionship know what a blessing that gift is to us.

I think these words in Jesus’ sermon were meant to give us great comfort. They were not meant to make us feel guilty about our worrying! No, Jesus did not preach a sermon on worrying to make us worry about our worrying problem! These words were meant to bring us comfort! God loves you. Did you hear me? God loves you like a loving parent loves Her child. And just as you protect your children, your Father will protect you.
And when your children go through difficult times, you are there to walk with them and hold their hands.

Let us be people who have confidence that God will step into the fiery furnace with us to shield us from harm. But if not, may we know that God still stands there with us. God and God’s children stand there with you. God never promised that your life would be perfect. But God did promise that you wouldn’t go through it alone. Know this brothers and sisters, you are not alone!
Posted by Unknown at 12:00 PM