God Loves You: God Is Bigger Than You Are

This was the message from the crew of Apollo 8 to earth on Christmas Eve 1968. As they looked out and saw this image, they read these words for all to hear.


Standing face to face with this creation, one can do nothing else but acknowledge and praise its Creator.


I thought about doing that myself, I assumed it wouldn’t have quite the same effect! Some people have been blessed with booming voices. Then, there are people like me…but did you hear what he said? One of my favorite parts of this recording is toward the end. He has gone through about 4 minutes of describing God, and then he made the statement
“I wish I could describe Him to you…”

That reminds me of John or Isaiah. Both were granted rare access into the throne room of God, both attempted to describe for their readers what they saw, but in the end, all they could do was use what is best in this world. Gold streets, emerald gates, crystal sea…but even these magnificent images and materials in our world cannot adequately describe who God is, because God is bigger & better & more powerful!

Brothers and sisters, have we lost sight of how BIG God is?

Here is the picture we looked at earlier.

This is the view that motivated the astronauts of Apollo 8 to read the creation narrative, but you do realize, don’t you, that this is not all God created? This next picture here is from much further away. This is a picture of hundreds of solar systems within our Milky Way galaxy.

If we pan out further, we can see our Milky Way Galaxy, which is made up of thousands (maybe millions of solar systems like our own).

Finally, the last image I will show is of thousands of galaxies in the universe.

Here is the amazing thing: God created all of this. We are residents of one small planet, within a tiny solar system, within a medium-sized galaxy, among millions of other galaxies! God is bigger than often give Him credit for being!

But here is the most amazing thing to me: The same God that created all of that also created this flower. 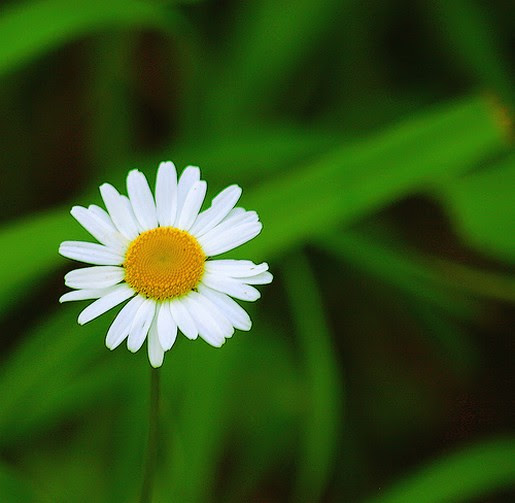 I want you to contemplate for a few moments all of the details of this creation. It had to have just enough water to grow. Too much and it would die. Too little and it would shrivel up. It had to have just enough sunlight to grow. Too much and it would dry up and die. Too little and it would shrink away and die. And for this flower to grow so many things have to work correctly. Its root system has to gather just the right amount of water. Its leaves have to catch just the right amount of sunlight. The veins in these leafs have to carry the food and water throughout the entire plant evenly. All of those things have to work properly to produce this! If you look around, this is not the only flower in the world. Billions or trillions of these things dot the landscape of this planet, each one needing all of these details to work just right.

You know what, God didn’t have to do any of it. God could have made this planet without flowers. But He didn’t. He took care of each of these details so you and I could enjoy the beauty this flower offers. He loves us that much! God didn’t have to make thousands of different kinds of trees, but He did. God didn’t have to give us mountain streams that run through picturesque valleys, thousands of miles of Oceanside beaches, or, beautiful West Texas sunsets…but He did. The same God that created all of those solar systems and galaxies also took care of the smallest details. Wow, church, our Father is an amazing Creator!

Do you ever forget how great God is?

If you do, here is something you can do to remember Him again. The apostle Paul tells us in Romans 1:20 that…

…through creation, we see His “invisible qualities” and “divine nature”…

The writer of Psalm 19 understood this truth very well. Listen to these words:

The heavens declare the glory of God; the skies proclaim the work of his hands. Day after day they pour forth speech; night after night they display knowledge. There is no speech or language where their voice is not heard. Their voice goes out into all the earth, their words to the ends of the world. In the heavens he has pitched a tent for the sun.

Day after day this creation declares loudly that God is powerful and mighty and creative. My question for you this this morning: Are you being still enough to hear those screams? When was the last time you turned off the television in your house around 9:00, gathered your family and sat on the front porch to watch the stars? And as you sit and watch, what an opportunity to talk about the Creator of the stars! When was the last time, instead of following that long list of to-do items on your schedule, you set it aside and took a walk outside, admiring the trees, smelling the flowers, took your shoes off and felt the grass on your feet! Church, God is crying out to us. Are we being still enough to hear His voice?

There was a movement in the 1960s that begin in Atlanta, Georgia. It actually originated at Emory University—a school I attended three decades later! There was a professor on staff there that tried to convince the world that “God is dead.” He started an entire movement, the “Death of God” Movement. His movement gained momentum in this country among philosophers and academics. The idea was this: We, humans, created the idea of God to give us safety and comfort. But over time, we’ve outgrown that need. In our enlightened state, we don’t need God anymore. And the only way we will truly reach our full potential as human beings is to get rid of all of that superstition. “God is dead,” they would declare. “Say it boldly and be liberated!” Wow! The only people who could ever make that statement are those who walk through this life with their heads down and their ears closed. So engrossed in life, so engrossed in themselves that they cannot and will not hear or see God all around them. May we be a people who join with creation in declaring that God is not dead. Our God is alive!
Posted by Anonymous at 3:43 PM

Email ThisBlogThis!Share to TwitterShare to FacebookShare to Pinterest
Labels: God Is Alive, God Loves You, Sermons